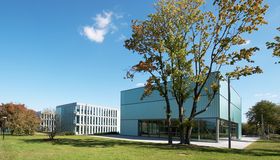 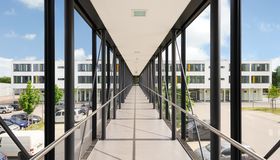 The STUDIOPARK Children’s Media Center is a unique center in Germany. The state-of-the-art Studioand office complex positions itself as a competence center for child-oriented media services. It offers optimum specialization advantages tailored to the target group, and generates synergy effects. STUDIOPARK Children’s Media Center is a one-stop shop providing core competence in the field of children's media to producers from all over Germany.

STUDIOPARK Children’s Media Center is located at the media location Erfurt in the immediate vicinity of Erfurt Trade Fair Center, the State Broadcasting Center of mdr (Central German Broadcasting), and the KiKA children's channel of ARD and ZDF.

The Children’s Media Center was built from the funds of the Common Task for the “Improvement of Regional Economic Structures” (GRW) of the European Regional Development Fund (ERDF) and the Foundation for Technology, Innovation and Research Thuringia (STIFT). The extension was funded by the Free State of Thuringia. The STUDIOPARK Children’s Media Center is operated by the BATT ‒ operating company for application and technology centers in Thuringia.

The STUDIOPARK Children’s Media Center has a production complex of four separate studios from 165 m² to 950 m², including the adjoining rooms (make-up rooms, checkrooms, workshop, storage) with an area of more than 2,000 m². In addition to the studio complex, STUDIOPARK provides approximately 4,400 m² of office and communication spaces that are flexibly constructed and fully-developed in terms of media technology. The conference area that is fully equipped with technology and that has a terrace exit, provides an area of approx. 200 m² if it is used as one single room. It can also be divided into up to four rooms that can be simultaneously used for meetings, seminars or conferences.

All studios are connected to the full HD image console and the Dolby 5.1 sound system, and are fully air-conditioned and equipped with lighting and stage technology. Six HD studio camera production units along with pumps and lenses are available to rent. Fully and appropriately furnished make-up rooms and checkrooms, artist dressing rooms, as well as storage rooms and workshops, provide the best prerequisites for studio shoots.